Five musicians from Penn State's 1960s folk music scene - Saul Broudy, Jerry Zolten, John Frink, Lynn Margileth, and Peter Kessler – came to the State Theatre in State College June 12, 2016 to perform songs and tell stories that speak to their experiences during the Vietnam era.   .The month the Road Show shares this concert with you as a part of a commemoration of the 50th anniversary of the Vietnam War.  WPSU Penn State is taking part in a national dialogue by creating television and radio programming that explores through personal stories how Pennsylvanians experienced the war.

Programs include WPSU’s original Television documentary, A Time To Heal Thursday at 8PM, and again Sunday evening at 7,  The debut of the original Radio program Time to Lay it Down: The Soundtrack of the Vietnam War, this Saturday at noon,   And on Sunday at 8PM, the premier of Ken Burns new 10 part series, “The Vietnam War.

This archived broadcast is a part of our commemoration.

Ruth Ungar and Mike Merenda are founder members of the Mammals,  and tour extensively as the duo Mike and Ruthy.  The came to the Center for Well-Being on March 11, 2017 as part of the Acoustic Brew Concert Series. 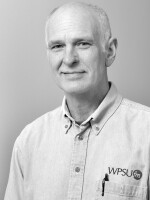