The announcement came just after the final vote on the spending plan, which includes no new taxes but leans heavily on one-time revenue sources and hopeful revenue forecasts.

In a written statement, the governor took issue not with anything in the spending plan, but with the Legislature’s failure to pass another one of his top priorities: changes to public pension benefits for future state and school employees.

“I will continue to work with the legislature toward meaningful pension reform,” said Corbett, in the statement. “I am withholding signing the budget passed by the General Assembly while I deliberate its impact on the people of Pennsylvania.”

At this point, Corbett could sign the budget late, reject it, or reject parts of it with a line-item veto.

“Not ruling it in, not ruling it out,” said spokesman Jay Pagni. Corbett did not address reporters.

The governor has touted his administration’s on-time approval of state budgets for the past three years. This is his last state budget before facing reelection in November. But Corbett said earlier this month he may hold out for the public pension overhaul, which would rein in the costs of state retirement benefits in a few decades.

House and Senate Republicans have come up short for votes, and Democrats remain opposed to the measure. Supporters in the House say they’re still trying to flip members to ‘yes,’ but the Senate’s efforts on the bill looked about done on Monday.

“Last time I checked we haven’t elected any new members to the Senate in the last three months, and we need 26 votes,” said Sen. Jake Corman (R-Centre). “So, unless the governor can change someone’s mind – which, he’s tried, and we’ve tried -- we can sit here all summer, but if we don’t have 26, we don’t have 26.”

House and Senate lawmakers spent hours Monday discussing the means by which the Republican majorities are bridging a $1.4 billion deficit without new taxes.

Until last Thursday, Republican legislative leaders were discussing a few new levies or hiked taxes to cover the gap. By Sunday, they were circulating a budget balance sheet that appeared to fill the funding hole.

Democrats say the maneuvers that eliminated the deficit are overly optimistic and unsustainable, leaving a funding mess for state budget drafters next year. They take issue with the number of one-time funding sources, like plans to dip into funds usually slated for property tax relief. Other sums would be siphoned from funds that make loans to small businesses and volunteer firefighters.

Such moves are not unusual in state budgeting, as any veteran of former Governor Ed Rendell will tell you. But Democrats say this budget is more irresponsible than past plans.

“It’s the volume and the magnitude of the transfers that we’re talking about,” said Democratic Senate Minority Leader Jay Costa (D-Allegheny).

The sniping spurred Rep. Bill Adolph (R-Delaware) to tick off the various fund transfers approved under Rendell during the 2009 budget process. Adolph tallied up $1.7 billion taken from numerous funds outside the state’s main coffers that year.

“But, based upon some of the comments that I have heard, you’d think this is the first time this was ever done in the history of the commonwealth of Pennsylvania,” Adolph said.

When one Republican senator compared greater spending to a luxury item, like a Cadillac Escalade, Sen. Andy Dinniman (D-Chester) compared the state budget to a Hyundai or a Datsun junker.

“I think what we’re going to discover is that this used car is going to stop sometime in January because there’s not enough money to take care of the whole year,” Dinniman said. “Perhaps the majority believes there will be a new governor by then and that will be his problem.”

Revenue side, spend side

Hundreds of millions of dollars will come from prior-year lapses – money that was appropriated in past budget years but not spent. Democrats say some programs may still be relying on that money to follow through on contracts still being negotiated.

The budget also assumes federal approval of the governor’s alternative to Medicaid expansion, which is slated to save $125 million.

The plan adjusts upward the estimated revenue from natural gas drilling under state parks and forests, from 75 million dollars to 95 million dollars. Lawmakers and staff say conversations with industry make them confident in the new figure.

The main line item for public schools will be flat-funded, though the budget doubles available grant funding and targets the $200 million to growing school districts.

It makes a roughly 11 percent boost to grants that fund early education programs and boosts program funding for people with intellectual disabilities. 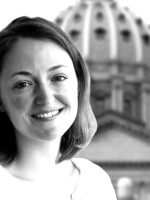 Mary Wilson
Mary Wilson is the state Capitol reporter for Pennsylvania's public radio stations, including witf in Harrisburg, WHYY in Philadelphia and WESA in Pittsburgh. Mary came to witf after a year being a catch-all staffer for a Maryland politician. Partisanship was a drag, but other things stuck: she has great empathy for those who have spent hours folding sample ballots and building campaign signs. Before that, she was a part-time show host and cub reporter at WFUV-FM in New York City. She covered the closing of the old Yankee stadium and narrated the scene of Harlem on the night of the 2008 presidential election. Mary graduated from Fordham University in the Bronx with majors in history and Italian.
See stories by Mary Wilson
Latest news from WPSU
Sign up to receive emails about breaking news in central & northern Pennsylvania.
Sign Up