This episode’s poem is “Retribution” by Sarah Blake.

Sarah Blake is the author of the poetry collections In Springtime, Let's Not Live on Earth, and Mr. West, along with two novels, Clean Air and Naamah. She received a Literature Fellowship from the National Endowment for the Arts and won the National Jewish Book Award for Debut Fiction. She was born in Philadelphia, Pennsylvania, and received her MFA from Penn State University. Her great-grandparents immigrated to Philadelphia, where they raised eleven children, most of whom stayed in the area. Blake raised her own son on the Main Line in Philadelphia before her recent move to the United Kingdom.

Blake’s poetry and fiction often consider the consequences of our actions, individual and collective. Today’s poem speculates on the idea of what is owed, what debt we might carry, and what form retribution may take, when we think of the damage we have done to the earth.

James Lovelock was a British scientist, environmentalist, and futurist who developed the Gaia hypothesis, suggesting that the Earth is a super-organism that regulates its own environment, leading some in the environmental movement to refer to the Earth as Gaia. Blake explores this idea through the elements of sadness and retribution, suggesting that the increasing cataclysmic weather and earthquakes and volcanic eruptions might perhaps be one sign of what a sad and angry planet may demand of us.

What if you owed sadness and so
became it?

Are you not indebted to everyone?

I’m asking
what if the debt were sadness?

What if when we walked,
we didn’t say,

this is Gaia’s breast,
but, this is her sadness,

and the mountains made sense,
all the moving plates,

earthquakes and volcanoes?
She pays it forward

and you’ll pay it back.
You will lose your body to

That was “Retribution” by Sarah Blake. 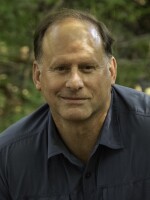